Cases collapse in court. Not usually the courtroom itself.

But that’s just what happened in a recent incident. The roof literally caved in, and effectively killed off one lawyer’s career.

The courtroom was evacuated. Health and safety refused anyone entry back. A lawyer’s papers were buried under the debris. That was the day he decided to quit his job.

Then there’s the dead rat at High Court, witnessed by the BBC’s Home Affairs Correspondent, the broken heating systems – it’s either boiling hot or freezing cold. Take your pick. Oh and what about the clocks telling the wrong time? All in a system we’re told is on the cusp of a digital revolution.

It would be funny if it weren’t so serious.

All these farcical stories emerging around the 70th anniversary of London’s network of criminal defence lawyers (LCCSA). I was supporting the media campaign which kicked off with a letter to the Times, ricocheting on with a Twitterstorm (with thanks to @chrismarriott6 @hjbrander @CDissington @sidewalksocsci and others) for their graphic accounts of crumbling courts, followed by words of warning from our most senior criminal judge Sir Brian Leveson, highlighting the looming crisis in lack of criminal defence solicitors for the future. Decrepit courts have become a symbol of the attrition of our justice system and legal aid.

The public mood is hard to gauge. 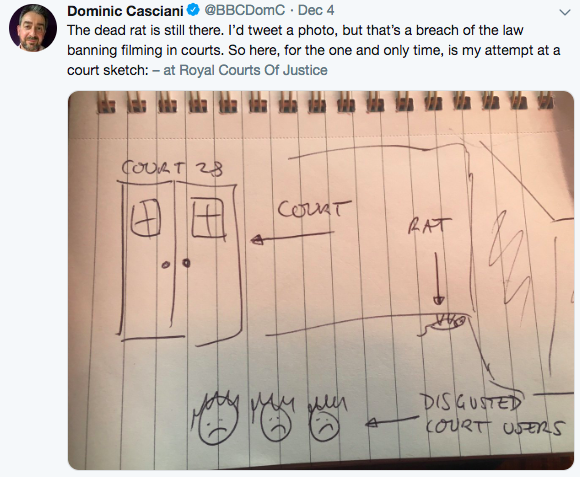 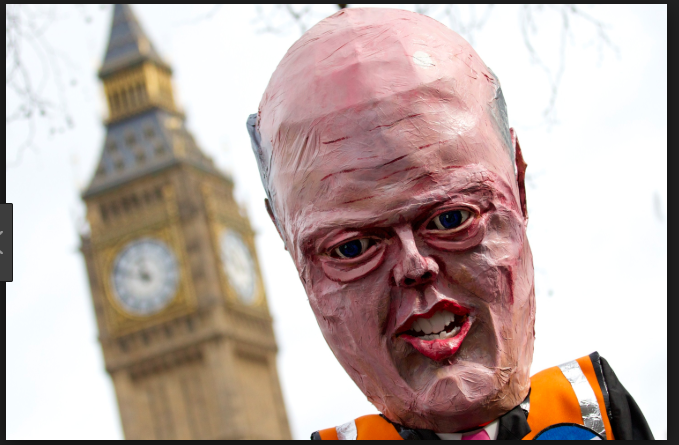 When our hospitals have trolley queues in A & E, or our children are taught in classrooms with rainwater being caught in buckets, parents and patients mobilise. They call in cameras and demand action. Rewind a few years ago. On seeing a crisis on the horizon with planned cuts, the lawyers downed tools and marched on Westminster several times. Thousands of legal professionals protested, helped by a sprinkling of stardust from TV star Maxine Peake, Blur drummer Dave Rowntree. The huge puppet of Chris Grayling appeared in papers and on screens all over the world.

I worked alongside the legal aid lawyers on media for those turbulent years, I’d love to say the public really got it. I’d love to say the penny dropped when BBC Breakfast TV viewers saw first-hand how innocent ‘real people’s’ liberty hangs in the balance. When their future depends on the loose thread of publicly-funded legal advice if they are wrongly accused of a crime. In line with the unwritten, media code, ‘real people’ told their stories to help ensure ‘normal people’ outside the legal bubble cared. Understood why legal aid matters if you or your brother, sister, colleague faces a charge with a serious life-changing legal consequence.

Perhaps the public wasn’t ready to understand a few years ago.

Still the sense of the ‘deserving’ patients and school children prevailed. Contrasted with a persistent stigma of the ‘undeserving’- defendants, witnesses. There was always a little wobble at the realisation that victims need courts and legal advice. They are ‘deserving’ and always have been, right? Nevertheless all are euphemistically lumped together under the label ‘court users’. All are real people with real lives obliged to attend our courts. At that point during the Westminster protests the ceilings hadn’t collapsed yet, the smell of dead rat hadn’t hit.

We hadn’t had Liam Allan. He was the boy next door, middle class student who narrowly escaped prison after police failures to disclose vital evidence which showed the rape case against him didn’t stack up. That’s not to say there hadn’t been many others before Liam Allan whose cases were affected by disclosure failings. But their stories hadn’t hit the media sweet spot. Nor had we had the best-selling Secret Barrister’s Stories of the Law and How it is Broken with its revelations of everyday chaos and compromised justice in our courts. Over the summer non-lawyers were stopping me in the street to say they’d read it and were shocked. Newspaper leader writers opined their shock and concern to a non-legal audience. Things will only change when non-lawyers care.

Fast forward a couple of years on from those protests with the Grayling puppet down at Westminster. Next year legal aid hits 70. Very soon we’ll have a review of the impact of cuts in civil legal aid matters. A Tory MP and chair of the Justice Committee Bob Neill has already said there’s no shame in admitting the cuts have gone too far.

There are signs the tide is turning with public opinion. A recent survey for Justice Week found three quarters of people now believe that justice is as important as health or education. They also believe people on low incomes should have free legal advice. This is a marked sea-change. A shift in perception, indicating we may be breaking away from the lazy ‘fat cat lawyer’ stereotype image. (And no, my past is as a journalist, I have never been a lawyer.)

Nevertheless, as any teacher would say, there’s ‘no room for complacency’.

In the same public opinion survey a 13% of people believe that the state shouldn’t pay for legal expenses if someone is accused of an imprisonable offence. 13% – I’m no mathematician, but that’s a lot. Plenty more work to be done to show that defence lawyers don’t just ‘get criminals off the hook’.

Now then is the moment to make the case for justice. Rats, broken heating, collapsed ceilings are bleak metaphors. But they have their uses. If this doesn’t help to make the public care, what will?

This site uses cookies. If you are OK with that, then please click 'Yes that's fine': Our policies