Skip to content
Previous Next
Meet Oliver the Justice Dog

Oliver is no ordinary dog. For a start, he has a routine of two hours daily grooming, teeth cleaning and regular pedicures. Not to mention his intense job training. The routine hints at his special professional status. This doe-eyed black lab retriever is no pampered pooch, paraded by a rich celeb, he is in fact the country’s first Justice Dog. He doesn’t wear a cape or have super powers. He doesn’t sniff out drugs in a police raid. What he does do is help and comfort distressed people in the justice system. Oliver recently became a pioneering new recruit with Kent police as part of a pilot research programme.

So what is a Justice Dog?
Specially trained, a ‘justice facility dog’ provides emotional support to children and vulnerable people giving evidence in traumatic legal proceedings – abuse and sexual assault cases, from investigation though to trial. There are 200 dogs like Oliver in the US and Canada, across more than thirty states. But there’s just one, Oliver, in Europe.

‘The girl wouldn’t sit down. Then they brought this dog in. It must have been ten minutes while she stroked the dog. They had brought this young girl in several times before and couldn’t get her to speak about it. It was just like that [clicks fingers] within ten minutes she opened up the dog’s ear and started speaking to the dog, opening up about this sexual assault. Vividly opening up. It was amazing the amount of detail she gave. Just shocking.’

A self-confessed sceptic, ‘I’m a psychologist. We question everything, ’ Dr Spruin says this was the moment she became convinced. Fast forward a few years and the Canadian-born academic leads the research into the effectiveness of using justice dogs. She is looking at how they can reduce stress for people in traumatic legal proceedings, in police interview, medical examinations or during the court process. A few weeks into the new pilot police scheme I visited Oliver and Dr Spruin at the start of this academic year.

Students mill around the university campus in Canterbury, cathedral in the background. Oliver and Dr Spruin, aka his ‘primary handler’, come to meet me. I lose count of the number of times Oliver is stopped. ‘Ah, aren’t you lovely. What are you doing here? Is it Ok to stroke him?’

Oliver is used to dealing with anything, unsolicited attention, even food that’s been left out and well-meaning treats. It is all in the training (cost £60,000), donated by an American charity. Oliver is bred from a line of guide dogs and born in St Louis, Missouri. His training began from day one, lasted almost two years in the States and never really stops now here in Kent. Quite different, it should be said, from the better known therapy dog who is essentially a pet, albeit a pet with basic obedience training who has passed a temperament test. To those in the know – which I confess I wasn’t before – it’s the training, breeding and rearing which sets Oliver aside from a therapy pet. Dr Spruin says forget all images of performers on Britain’s Got Talent,

‘He’s been trained and bred to sense emotion. If someone’s stressed he’s trained to come up to you and just sit quietly. To do whatever you want him to do: comfort, stroke, or hug him. Whatever you want for emotional support. A child who can’t speak, can’t explain what’s happened, when someone touches a dog it releases oxytocin in the brain and that causes a natural calming effect. There’s research behind how it happens. That calming effect makes the person more trusting and opens up.’

These stories can then become what is known in legal speak as ‘best evidence’. Evidence which, if the case goes to court, is admissible. It is worth pointing out this support is intended to extend not only to vulnerable victims and witnesses with communication difficulties but also to defendants. It is early days here and the English and Welsh system is different from those in North America. The criminal justice system itself, with its mix of tradition and centuries old culture, has proven complex to navigate. Meantime Oliver has to keep up his skills, for instance practicing games with children’s toys and honing his ability to read emotions. He demonstrates for me, at the command of ‘lap’ he gives a big hug. At the word ‘visit’ he gently rests his head on my knee. 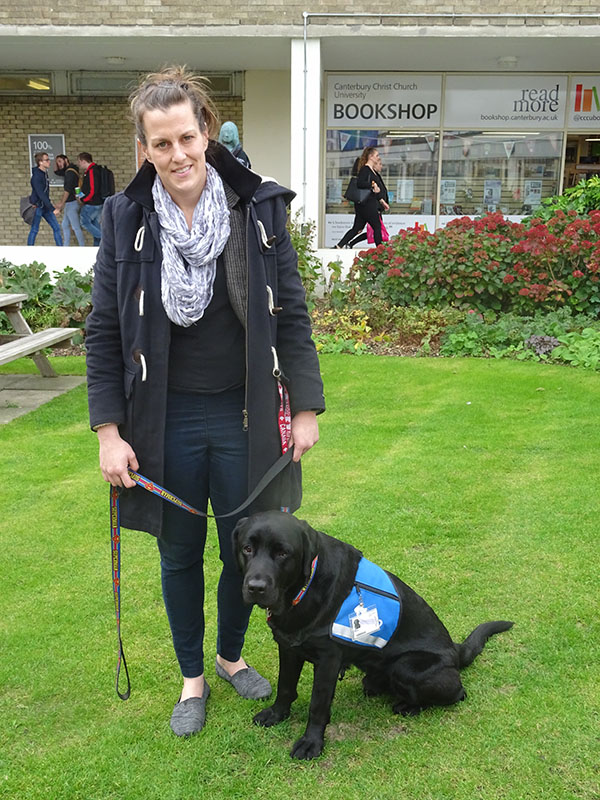 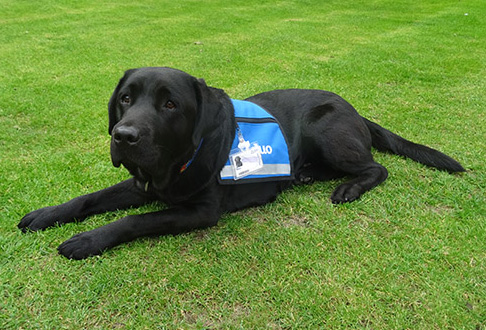 Oliver has collected supporters along the way. Within Kent police a handful of officers are now in a position to work alongside the black lab-retriever if either a child or a vulnerable adult wants to use him.
Earlier this year the Victims’ Commissioner met Oliver at a conference. Since then Baroness Newlove is a signed up member of the Oliver fan club. Her office said,

‘It is wonderful that Oliver is able to help victims through the trauma of appearing at court and helping them to give their best evidence. A justice dog, enabling justice to be served for the most vulnerable victims!’

Over the holiday period Sky News reported Oliver’s work as the first justice facility dog in the UK. They spoke to one man Zach Rigler who gave evidence in a crown court after witnessing a knife attack. He didn’t have the option of a specially trained dog to comfort him in court. He told Sky he wished he could have,

‘I just wanted to be out of there, I wanted it to be over. On the day, I would have loved to have had a dog with me, even just to have played with while I was waiting, to take my mind off things.‘

Looking to the future, Oliver’s longterm success depends on showing that he gets the job done. The next few years involves the gathering of lots of academic data- both from the police pilot scheme and from mock trials run by Christchurch university. Oliver’s goal then is to prove that he can help deliver fairer justice, especially to those who struggle to have a voice. As Oliver retires to his bed for a rest, his academic ‘handler’ says she has an ambition: five Justice Dogs in our criminal justice system by 2023,

‘It took twenty years to get two hundred in America, It has to be slow and steady. Baby steps to convince the justice system and whoever else. I don’t mind. I know it’s going to work.’